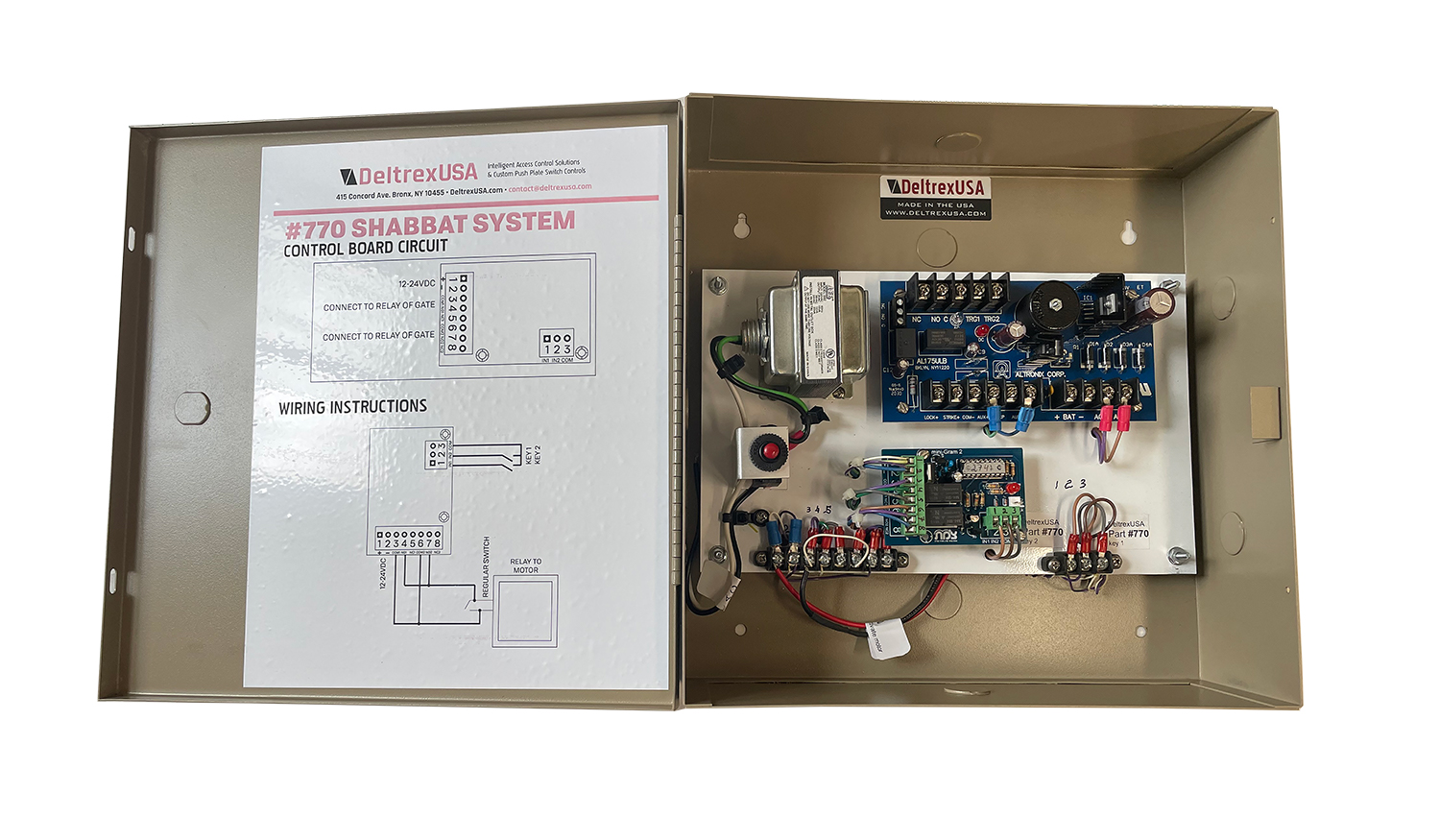 Our products provide access control solutions that are permitted on Shabbat without any limitations!

DeltrexUSA has designed and developed security systems for entrance to apartment buildings, synagogues, yeshivas, hospitals and security installations to be used by Shabbat observers. Using the principle of GRAMMA (indirect action) and the method of “modified current” (SGS), our systems are authorized to be used on Shabbat without any limitations.

SGS does not open or close an electric circuit.

The halachic approval for this action is based on the fact that the prohibition of using electricity on Shabbat is to open or close a circuit (this is a violation of the action of Boneh – construction – or Molid – "giving birth" to something new). But modifying a property setting (current, voltage, frequency, or capacitance) of an existing current is permitted.

This technique is suitable for doors that are operated through the use of a magnetic lock, electric lock or electric strike.

A touch type switch is used as a sensor that changes the voltage, current, and the frequency because of the electronic proprieties of the human body. It can sense and respond to the slightest human touch replacing the mechanical switch applications. The variation in changes also depends on how long the hand maintains contact with the surface.

The Shabbat Gramma Systems (SGS) have been approved by the most prominent rabbis and they are routinely used in many places where religious people regularly pass through.

Certificate of compliance is available on request.

For additional information on our Shabbat Gramma System, Please email us at contact@deltrexusa.com or give us a call at 718-401-4006

An indirect action is called "gramma", from the Hebrew root meaning "to cause" something to happen. The source for permitting indirect labor is a Mishna, where it is written that if a fire breaks out that doesn't involve mortal danger, "all the vessels can be separated by a barrier, either full of water or empty, so that the flames will not cross over." [Shabbat 120a]. That is, one is permitted to fill jugs with water and place them in the path of the fire. When the heat bursts the jugs, the water will extinguish the fire. In a more common example, if a brush fire breaks out but there is no mortal threat, water may be poured around the outside of the fire but not directly on the flame. The actions described are indirect ones – gramma.

In the Talmud, this is derived from the verse, "Do not do any labor" [Shemot 20:9]. Direct labor is prohibited, but gramma is allowed.

A common example of an action of gramma is to change the setting of a Shabbat timer. For example, the timer might be set to turn the lights off at midnight but, if there is a strong need, the time can be shortened by mechanically adjusting the setting.

Two conditions (which are based on the same principle) are necessary for the action to be considered gramma:

(1) At the moment that the gramma action is performed, no simultaneous action should take place, and no sequential chain of action should be started (the initiating action must be insignificant from the point of view of Shabbat). For example, turning on a delay timer that will cause a specific action after a preset time is not gramma. It is like shooting an arrow, which is considered a direct action even if the result takes place far away and after a delay. Placing a jug of water in the path of a flame or changing the setting of a Shabbat timer, on the other hand, do not cause any immediate effect.

(2) An independent factor, which was prepared before Shabbat or is created automatically, will take effect "later on" and be influenced by the action that was performed by the person. Only then will the desired effect take place. In the previous examples, the flame will reach the water "later," just as the timer switch will be activated after an indeterminate delay.

Rabbis of our generation agree that medical and security needs have the halachic status of a significant loss so that equipment used for such needs can be operated on a gramma principle.

The DeltrexUSA access control system is an essential needs that operate on this principle. "Electronic gramma” which is a special circuit that puts out a very short pulse (one millisecond or less) on a regular cycle, for example, once every ten seconds. When a person changes the position of a switch or presses a special button, he or she is not doing anything, and he does not initiate any sequential steps. Only when the test pulse arrives will the circuit "discover" that the switch has been moved or the button has been pushed. And then, the desired action will occur.

The mechanism includes a safety circuit to guarantee that nothing will ever happen at the instant that the switch is pressed.

In the use of such device , no melakha of the 39 melakhot is performed, and using it also is not similar to any melakha and it also does not lead to any melakha being done.

It should be noted that the time interval described above as "later on" must be long enough to be perceptible to a human being, and it must be perceived as an unneeded time delay.

For more information (in Hebrew):